The city was deserted due to the ferocious storm, which was bad indeed, and a harbinger of worse to come. There was not a soul on the eerily howling streets, but lit windows everywhere signified that all was well. Of course, the folk of Galilan had to know who was in the hospital; storm or not, the streets would’ve emptied anyway. No doubt some serious debates were in progress whether to stay or leave the city.
Posted by Elaina J. Davidson at 2:10 AM No comments:

Kallanon is a Valleur word, but the Kallanon are also the Dragons and Dragonnes we meet in Glittering Darkness (Vol III)
Posted by Elaina J. Davidson at 5:58 AM No comments:

Come with me to other worlds 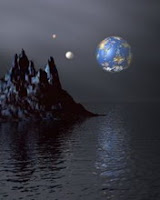 There are a fair few worlds in Torrullin's universe. Some form backstory, others are visited in more depth.
Posted by Elaina J. Davidson at 3:49 AM No comments:

Email ThisBlogThis!Share to TwitterShare to FacebookShare to Pinterest
Labels: Appendices

It's good to belong

McSee watched the faces. It was good to belong once more. Because he could be regarded as a traitor, he’d expected them to turn him away. It hadn’t come to pass. He understood one or two were reserving judgement, but he hadn’t been made to feel unwelcome. He had not, after all, betrayed them, and they knew that. Vannis and Tanos had rowed out to Little Paradise on hearing their hail, and when McSee leaned over the rail and said ‘Torrullin sent us’, Vannis had smiled and simply said ‘Welcome’. Tanos gripped his hand and then he made Lanto and Raken feel right at home. Lanto’s big ears were still pink at finding himself in such august company, his freckles less evident against rosy cheeks. Raken and Vannis had stiffened at the sight of each other, an instant and mutual attraction. Both withdrew from it immediately, and were uneasy in proximity.
Posted by Elaina J. Davidson at 12:37 PM No comments:

The second object was a burnished copper ring set with an oval garnet. Kylan frowned; it seemed familiar.
Torrullin dived into his pocket…and pulled an identical one out. ‘A Mantle signature ring. It permits the wearer access to the archives. Merle would have had one; it is yours now.’ He glanced at his own ring, and then put it away.
‘May I use it?’ He didn’t really desire to; he merely wanted to know what it meant.
‘The ring is not hereditary, but you may use it,’ Torrullin murmured, and then he smiled. ‘I am, after all, the one who yays and nays in that department….not that the Mantle will have much power after this.’
‘I have one of those,’ Raken said guiltily. ‘Plunder, you understand?’
Torrullin laughed at her. ‘So that’s how you got in!’
‘Yep, but it didn’t help me get out!’
‘Well, you may use it anytime also, lady pirate.’
‘Um, no, I’d be arrested if I go near any law abiding centre,’ Raken muttered. ‘But thanks.’
Torrullin grinned wickedly, and Raken stuck her tongue out at him.
And Kylan drew the final object from the chest, the by-play going over his head. It was a small hexagonal disc, pure gold, embossed with strange configurations.
‘Gods!’ Vannis gasped, instantly ashen as if he’d seen a ghost.
Kylan looked at the Valleur, they all did. ‘You know this?’
‘Where did your mother get that?’ Vannis rasped.
‘Vannis?’ Tanos demanded as Torrullin reached for the disc. Kylan relinquished it to him without hesitation.
Llettynn glanced between them, seeing trust, and speculated that Torrullin could engender either complete loyalty or absolute mistrust. He wondered where his feelings lay.
‘It’s Valleur,’ Torrullin commented, turning the disc this way and that.
‘Of course it’s Valleur! It’s…its…shit!’
Kylan frowned darkly; Kisha gripped his hand.
‘Vannis, calm down,’ Tanos said forcefully. ‘Kylan doesn’t deserve accusation.’
Vannis drew breath and then cursed again as Torrullin started reading the pictorial language on the disc. ‘Do not read it!’
‘Bloody hell!’ Torrullin bit out, also frowning darkly at Vannis.
‘You of all people, Enchanter, should know better than to read the Valleur glyphs aloud!’
Posted by Elaina J. Davidson at 5:20 AM No comments:

Collage - Tales from the Path of Shades 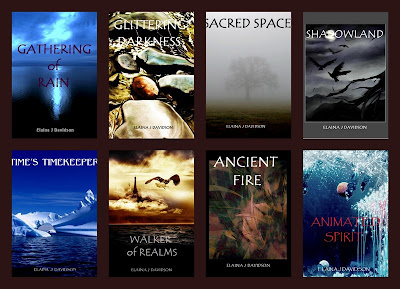 Posted by Elaina J. Davidson at 6:01 AM No comments:

Email ThisBlogThis!Share to TwitterShare to FacebookShare to Pinterest
Labels: Tales from the Path of Shades

I read. A lot.
Many say that to read too much is to disadvantage your writing. You are influenced by others and thus lose your unique style.
I disagree.
I find that I am inspired by others. New words, tweaked grammar and grand ideas are given, and even a sense of bravery is instilled- I dare to write about something in a manner considered strange...because another has dared.
I do not copy, know that. I am simply inspired.
And thus: read as much as you can!
Posted by Elaina J. Davidson at 5:43 AM No comments:

Kar Akan is the valleur word used to name a planet in the Forbidden Zone, known in the present as Karakan, a Murs Siric enclave...for a while.
Posted by Elaina J. Davidson at 4:37 AM No comments:

Averroes is a shy young woman. She is rescued as a teenager from the terror on the streets of Galilan by Avendeath, and in his care she begins to blossom. When she meets the half-Valleur she remembers her past (and her true name) and her renewed heritage gifts self-confidence and strength. The shy young woman gradually gives way to self-assurance. She, unwisely, loves Torrullin.
Posted by Elaina J. Davidson at 4:14 AM No comments:

Email ThisBlogThis!Share to TwitterShare to FacebookShare to Pinterest
Labels: Characters

The dilemma that is Grinwallin

‘You are Grinwallin’s architect. She more rightly belongs to you than she does to us.’
‘I imagined her only, Teighlar. You and yours raised her and lived in her, gave her heart and soul. She is not mine.’
‘You are so stubborn, damn it. We should put it to the test.’
Torrullin jerked his way. ‘Gods, no.’
‘Worried, my friend?’
‘Yes, bloody hell. One doesn’t mess with Grinwallin.’
Teighlar pushed his face into Torrullin’s. ‘Why not?’
‘You have seen what she is capable of!’
‘Why is that? Why does she throw a tantrum when challenged? Why is she more than stone and time? Why does she react when you are up to something? Pray tell, why does she listen to you?’
Torrullin pushed the man away. ‘Stop it. You know why. You were there.’
Teighlar smiled sadly. ‘Tell me again she doesn’t belong to you.’
Torrullin sighed as well and turned away to stare over the plains. ‘Imagination is not everything.’
‘Yes, it is. Cities are raised on it and worlds settled and space is traversed in it. Sentience is imagination. It is first, Torrullin, the creator.’
Torrullin said nothing.
‘But I would take on your dilemma with Grinwallin any day…if I could exchange it for the fruits of my imagination,’ Teighlar said softly.
Posted by Elaina J. Davidson at 3:17 AM No comments:

Arcana - those who came before
Posted by Elaina J. Davidson at 7:15 AM No comments:

Valaris has a policy of freedom of religion, and the following are the main players of both past and present:
Naturalists
Techno-cult
Followers of the Prophet Monchalar
Followers of the Deity Tanos (this ‘religion’ did not die even though Tanos himself lived on Valaris openly)
Order of Continuity
Various others have come and gone over time, and are footnotes in history, and others will come and go as time progresses.
Posted by Elaina J. Davidson at 5:05 AM No comments:

Email ThisBlogThis!Share to TwitterShare to FacebookShare to Pinterest
Labels: Appendices 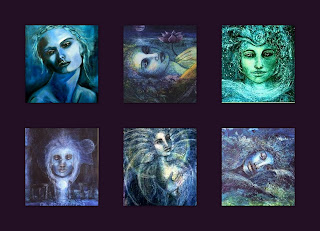 A good friend of mine is also a great artist. I put a few together to show you...and I'd love to have her work on my book covers! Click on the title to go to Shaune's blog...
Posted by Elaina J. Davidson at 2:32 PM No comments:

Email ThisBlogThis!Share to TwitterShare to FacebookShare to Pinterest
Labels: Art

A boost when needed...

I hope y'all can read this! A great comment indeed.

Posted by Elaina J. Davidson at 2:27 PM No comments:

The pages settled and Teighlar squinted over the book. ‘Here…’ He pointed vaguely and started to read: ‘In time beyond measure there lies a great mystery, one no man shall uncover without the synchronisation of heart, mind and soul. Let it be known that time is dependent on these factors, but not so the measurement of it. In much the same way is past, present and future presented, for heart is past, mind is present and soul is future. It is a truth that the heart heals, the mind soothes and the soul sees the potion of forever. Yet this is a mere portion of oneness, even as they are imperative in maintaining wholeness from the outset. In time before, time after and time to come, travel was, is and will be limited by the strength of such synchronisation, although it be granted that travel is able in artificiality, more so in magic, less so in mechanics. Yet, as in most ideals, there is exception; on an olden orb be the reality portal four in ten, but be warned, the way is filled with hazards and many dangers, and no journey should ever be undertaken lightly or without extreme thought. Travel negates time and time negates travel. Listen to the heart, hear the mind and know the soul is at greatest output when wish is will and will is wish. Friend, reader, listener, wish for will seeks an eternal companion, for no sentient should be alone in time unbound and yet therein lays error and trial. No sentient is created exact and same, thus difference is challenge, danger and also greatest gift. The mystery is revealed when hearts beat as one. Oneness lies in the flight of a beating heart, borne aloft only by wings of mist. Safeguard all your futures; flee from the shadows mist brings your way.’
Teighlar fell silent, and that silence stretched on, and then: ‘Who wrote that?’ Tristan voice sounded strained.
Teighlar passed the book over. ‘It is Luvan.’
Posted by Elaina J. Davidson at 1:33 AM No comments: