He hunkered down on the unmarked turf. There was no sign, not even the slightest mound or depression to show that Neolone’s mortal remains lay buried in the level plain that was Grinwallin's plateau. But he was there and the place was forever etched into his memory.
Torrullin touched his chest, an unconscious gesture from the past when the Dragon on his chest had been the symbol of leadership. The Dragon Neolone hadn’t just been a symbol, a physical manifestation of sovereignty, however, but alive, sentient, a force in battle. He still missed the creature. In the end only the damned Dragon had known him.
Sighing, he rose. It was so ephemeral. If Neolone, millions of years old, didn’t survive, how could anyone expect to? Even the Immortal Guardians were now gone, but for one Centuar, one Siric and the Q’lin’la. Of the Ancients only the birdmen, Declan and the Senlu remained, the latter only because they had re-risen two thousand years ago. Belun was next in age and then himself, although the two of them were not close to Ancient, with Belun having the greater claim. And when all was said and done, the only true Immortal companion he could expect to be with him into goddamned eternity was…Teighlar. There was no one else. He turned to study Grinwallin in the moonlight. Paper lanterns lit the streets and courtyards in pools of colour, unseen from where he stood, so that he saw the silvery tips of roofs and walls with the suggestion of colour rising up.
Posted by Elaina J. Davidson at 12:34 AM No comments:

The urge to fight this enemy departed when the Dinor spokesman revealed they had no quarrel with humans. They hadn’t come all this way to mete death out indiscriminately, and Torrullin’s mind moved into negotiation mode. He and Tris would appear as human to these…and thus there could be a way to turn them from this course, negotiate a settlement…maybe…until Camot and Krikian were dumped at the temple’s steps. Golden hair and skin and yellow eyes. Unmistakable. Both men were trueblood.
Torrullin looked around, motioning for Tristamil to stay up on the platform. Many. Too many. And he couldn’t employ the Voices. He’d never again use the Voices…but he had broken that promise before.
‘The Valleur evacuated when they heard Margus was coming,’ he said, buying time.
An ugly people. Short in stature, an average of about five feet, but brawny with heavy muscles. Strong, familiar with toil…or war. More likely was raiding, preying on each other, but united now in this quest, an absolution from an ancient oath. Hairy: thick, bushy, dark hair, with full, heavy beards, dark hair on the backs of their hands. Generally swarthy, although a few sallow complexions were in evidence. Square faces, big noses with flaring nostrils- also hairy- and deep-set eyes under protruding brows. They were almost pre-historic in make-up, but their eyes swiftly belied a prehistoric way of thinking, revealing that they were more than first appearances. Not only were the eyes sharp in intelligence, but also startling in colour. There was not a pair of dark eyes among them; startlingly pale- black irises encircled by opal-coloured pupils so light it bled away into the white. There was nothing prehistoric about it; these were the eyes of sorcerers. Unsettling. Disturbing. They wore leather breeches and knee-high boots with blackened spurs protruding from the heels- horse riders or just naturally vicious? Heavy fur coats, roughly worked and smelly, enlarged already broad shoulders, and heavy scimitars hung from a leather harness looped from one shoulder across their barrel chests.
Posted by Elaina J. Davidson at 12:32 AM No comments:

Email ThisBlogThis!Share to TwitterShare to FacebookShare to Pinterest
Labels: Excerpt, Walker of Realms

Torrullin listened, lying against the pillows and rubbing gritty eyes into wakefulness as his mind grew ever sharper. Tanos paced up and down, talking, explaining, describing. It was the first time he’d been in his son’s private chambers, but he saw nothing, not even the continuing evidence of Saska’s life there. Seeing that blindness and the single intensity, Torrullin knew his father wasn’t being fanciful. Although Tanos would never scoff at another’s dreams, he tended to come down hard on his own…but not this time.
It required deciphering. Torrullin interrupted mid-flow. ‘Tanos.’
Tanos ceased pacing and rounded on him. ‘You don’t believe me!’
‘On the contrary. And we need clarity on it quickly.’ Torrullin rose from the bed, naked, to dress- the black, as ever, as Quilla would snort. He muttered darkly as his long hair caught in the studs of his sword belt, causing Tanos to grin. Torrullin’s one vanity now was his hair, but how it could irritate him also. It was the reason he, Tanos, kept his own locks to a manageable shoulder length.
Torrullin vanished into the bathroom and when he came out again his frown had deepened. He stood in the doorway.
‘What?’ Tanos asked worriedly. In the interim he’d glanced about the bedchamber to see Saska everywhere and now felt the overriding urge to escape.
‘My hair,’ Torrullin muttered. ‘It is time to cut my hair.’
‘What?’ It was an explosion of relief, and then he was slightly peeved. They had more important matters to hand. ‘Now? Torrullin, for pity’s sake, just tie it back.’
Torrullin raised a finger. ‘The Valleur always shave it off before battle…’
‘Dear gods, you aim to take it all off?’ Tanos was aghast.
Amusement came. ‘No, I’d not go that far. It is, however, a vanity out of place at present and I probably won’t have the time to coddle it anymore…and truthfully it irritates the hell out of me.’
Posted by Elaina J. Davidson at 12:29 AM No comments:

For centuries the people of Silas Town told of how the Great Dividing Forest shut the clanlands off from the continent, but both north and south discounted it as ravings of drunks and criminally insane.
Silas had access to both the Nor and Meth Peninsulas and saw well the lie, but were disregarded, and the two peninsulas went about their business wholly unaware of each other as well. While the Nor wasn’t clan, they, too, were divided from the south and living with the same delusions, and as time moved on neither peninsula ventured to the other, too afraid of the rife piracy and lunacy of Silas. That situation existed long before Drasso and time has a strange way of engendering a comfort zone. Only Silas and Two Town, sea-faring types, knew the truth- the only contradiction in all this was the south knew of Silas Island and its shameful way of life. Unlike the humanitarian forays into Two Town, however, Silas was ignored, out of mind because it was out of sight, and there was the Forest to consider, and all manner of ills waited if one dared sail around the northern headlands.
Although Silas Island possessed only one named town, the land was in reality a gigantic city that spread from coast to coast in all directions. Silas Town was Silas Island and vice versa.
Posted by Elaina J. Davidson at 12:27 AM No comments:

After the Ritual’s success- that may not be revealed- the newly created Immortal lost his or her tail, a wrenching that not one overcame. Always they yearned for the freedom of the deep, and immersed themselves in water whenever the opportunity arose. They could return to their Mer states for brief periods, a concession made in the interest of long-term sanity, this tweaking having been decided upon after the first few Immortals lasted no more than ten years away from water. They died of sadness, nothing else.
The current four in the Dome had been a unit for four thousand years, three of them together for ten thousand. They counted among their blessings that no new, successful candidate had to experience the wrenching that accompanied the Ritual. They had not forgotten- they still yearned for Canolantis.
Of the four, Saska was the ‘new’ arrival. She was exceptionally lovely, with a slender, lissom grace. Her pale blue hair was almost as long as she was tall, loosely braided to hang over one shoulder to coil in her lap. In the interest of practicality she tended to cut it to a more manageable length when confrontation was at hand. As she sat listening to the revelations, the practical side of her nature was already contemplating when she would have the opportunity to take a scissor to it. She was dressed in soft green breeches and a loose tunic of the same colour, which complimented the bright green of her eyes. Her slender feet were shod in pale blue slippers reminiscent of elven shoes, and about ankles and wrists she wore slim silver bracelets that tinkled as she moved. She was a sylvan nymph with the strength of character to become an Immortal, and she was much tougher than her ethereal beauty revealed.
Her tinkling drew attention from Llettynn. All eyes swivelled to the Mer.
Posted by Elaina J. Davidson at 12:24 AM No comments:

Email ThisBlogThis!Share to TwitterShare to FacebookShare to Pinterest
Labels: Excerpt, Gathering of Rain 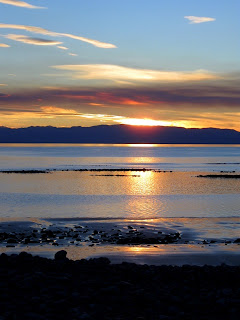 Posted by Elaina J. Davidson at 5:37 AM No comments:

Time can be strange, an enigma

Time, the great puzzle. Sometimes we feel as if there aren't sufficient hours in a day and we hark to every minute to make it stretch to our advantage (often causing panic, of course, which is a disadvantage and removes available minutes). Other days we feel as if the hours stretch unending, we can 'hear' those seconds laboriously ticking on the clock in our heads.

Could it be state of mind? Could it be how busy we are...or not? Does feeling overwhelmed subtract time from what is essentially the same period allotted daily? And, conversely, does feeling at ease gift us additional hours? We could probably answer 'yes' to all of that, which means the concept time is seriously subjective...and has absolutely nothing to do with the actual measurement.

Well, I've been snowed under recently (therefore lack of new posts!) and asked myself 'why, oh why, is there never enough time???' Today I laugh at my frustration...seems I have it at my disposal- I simply need to manage it better.

Then again, the sun is out, it's silent and calm out...why bother with questions? Time to enjoy the warmth!
Posted by Elaina J. Davidson at 3:52 AM No comments: