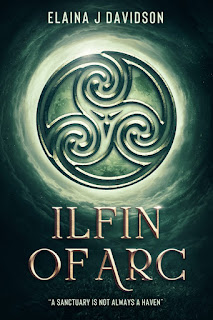 According to legend, a paradise awaits across the plains, a sanctuary that has survived every impact and every battle. Known as Arc, it is a place of isolation, a place to restart civilisation.

A fireball grows ever larger in the skies and ancient enemies wing through the spaces; the world Massin is the gathering place for every omen of disaster. Every resident soul faces a choice. Time now to march south to the sanctuary, from the eastern highlands and the western seas, there to escape apocalypse, and the renewal of the war between the Ilfin and Glonu, or stay behind, hoping for a miracle.

An Elemental will find the sanctuary – Lyra is gifted – a Warrior will defend the dispossessed – the boy Horin will grow up fast – and a Marsh Devil will lead them – Damin spends years preparing for this epic event – but it is also true that a sanctuary is not always a haven. Has the legend lied? Will Arc protect them?

Prepare for an adventure that will journey from ancient ways of living into high-tech environments. Ilfin of Arc is a dystopian Fantasy tale that flies into star filled spaces – strap in!

The Light is Creation

NORMUR’S SPREAD OF lights removed the stars from clear view and their absence in the dome of night saddened Lyra. Standing at the window overlooking a multitude of amber glows, she longed for the countryside with its silver spangles and cosmic spirals. Out there in the silence she was able to know herself; here she felt abandoned.

Duty summoned her to this press of people. Somewhere out there, amid the many who lit lamps and lanterns against the darkness, she would find Damin. He came to this place to lose himself deliberately, but the time for that kind of selfishness had now passed. Damin needed to go home, as she needed to return there.

Together they would convince their families and friends, and the larger community, to flee their homes, because she could not do so alone. They did not listen to her, for they were wary of her, but they would at least gather to hear Damin’s words, and she might then speak through him. Her trouble now lay in attempting to convince him of her words when she did find him.

By the light of stars, I hope our loved ones will hear. Our time is short. Soon even flight will come too late. Soon every star we swear by will be occluded.

Hearing the door creak open behind her, Lyra swung around. Initial fright swiftly surrendered to relief. Her meal had arrived.

Striding forward across a threadbare carpet, she searched for her purse in an inner pocket. Her forceful actions frightened the boy delivering the food, for he stepped back swiftly, his brown eyes growing ever bigger. Her mother always admonished her that she needed to control her movements, because she tended to alarm people with her direct personality. Too much like a man, Lyra, use your femininity more! Already they think you strange; do not give them more reason to whisper about you behind your back.

Slowing her movements, Lyra smiled at the boy as she handed over the required coin, with an extra one for him. He swallowed, nodded, and made himself rapidly scarce.

Shaking her head and tucking her dark hair behind her ears, she sat at the small wooden table placed in the corner, trimming the lantern’s wick there for added brightness.

Potatoes coated in spice, with slivers of venison. Damin would love it. How would she find him amid so many people? Here she was not only abandoned, but also lost.

AFTER SPENDING THE night restless upon a hard bed and enduring dark hours punctuated with too many strange sounds, Lyra rose with the first of dawn’s light. It was overcast out, but a country girl knew when the new day had arrived.

Reopening the shutters she closed against the intrusive light from the city by night, she gazed into a dreary landscape. It occurred to her that the glows against the darkness lent the city prettiness, for by day it was dreadful. Buildings many storeys high created alleys of only shadow, and the grey, filthy stone possessed little by way of appeal. Roof tiles were encrusted with decades of grime, all colour long ago scoured away by weather and time. Smoke weaved out from chimneys to choke oxygen from the air.

The spread was even larger than the lights of the night had her believe. A maze of alleys and streets lay before her, and never had she seen as many buildings together in one space. How did so many people manage to eat daily?

It would be difficult to find Damin in the cesspit of humanity, but she at least possessed a clue as to his potential whereabouts.

The inn she chose for the night was recommended to her by a traveller she encountered on the road four days ago. Thank the stars, for upon looking down she realised how problematic it would be to make informed choices here. What did she understand about cities? Where was safe and which areas needed to be avoided?

The traveller she met was a Normur local on his way to Alarn in the east and was thus familiar with the best and the worst of this city. He told her to commence her search for someone lost in the lower region. Apparently, all newcomers landed up there, because rent was cheap while a stranger waited and hoped for some form of employment.

How to reach the lower part, though, was another matter. While she was aware it lay at the foot of the cliffs that marked the ending of the plateau, how to descend remained a mystery. Today she needed to talk to people or she went exactly nowhere. She hoped that she would not frighten them off before someone was prepared to talk to her, for she required a guide.

Most folk were wary of a girl with personality, but they were terrified of one with a blue and a green eye.

THE BOY WHO had delivered her meal sat on the step outside soaking up the warmth of a new day as Lyra left the inn. He grinned at her, which was a marked change from his previous reaction. Seeing that his courage was renewed, she asked if he knew how to reach and enter the lower city.

After looking at first her one eye and then the other, he asked, “Why do you want to go there? Folk get killed there.” He then glanced at her pack slung forward to hang from her shoulders against her stomach.

The traveller on the road suggested she do so. Safer, he said. A woman alone? Pickpockets will clean you out from the back. It was decent gear, of quality leather and shiny clasps. Her younger brother made it and suggested she use it. Weatherproof, he said, and strong enough to cope with any travel. She was still amazed by that adult statement; it was as if Horin had seen more of life than she had, when he had never ventured further than the boundary of their community.

Clearly this city urchin realised her pack possessed value and obviously he now wondered why she needed to enter the lower city. In his mind she had coin; why leave the inn unless it was to take to her travels again, which surely could not have anything to do with what lay at the foot of the plateau.

“I am looking for someone,” Lyra told him.

The boy nodded as if he was life’s greatest sage. “I can take you,” he said. “A silver for my troubles.”

The phrase sounded like something he overheard someone else use, for it was too mature. Lyra smiled at him, liking him. He reminded her of Horin. “Two bronze. One now and one when we arrive.”

He squinted against the grey light, debating merit. “Fine,” he eventually murmured, and held his hand out.

Supressing a smile, she found a bronze and handed it over. “What is your name?”

“Attis,” he mumbled as he clambered to his feet to stretch and yawn.

He was scruffy in the sense that his clothes needed mending, but he was clean and well-fed. Working at an inn had its advantages, clearly. Perhaps he was the son of the owner. Untidy tawny hair was a mop of tangles she wished to comb into order, as she did for Horin, and brown eyes were filled with mischief.

“Let’s go,” he said, and stepped into the cobbled street.